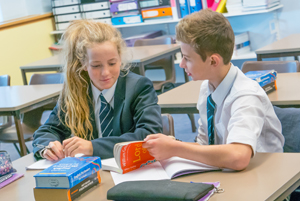 Though our literary passions and areas of expertise within the English curriculum are diverse, the members of the English Department are as one in their love of language and literature.

Two guiding principles lay at the heart of all we do. The first, is to nurture our pupils into becoming confident and eloquent communicators; empowered through their command of language.  The second, is to encourage our pupils to engage with the world around them through literature and reading. A passion, we hope, that will last a lifetime.

In Key Stage 3, pupils are taught in mixed ability groups and have six lessons every fortnight. Each pupil will be expected to pursue individual reading as well as study a range of texts in class. Alongside this, pupils will study a variety of poetry, non-fiction and classic texts. Shakespeare will be taught in each year but in Year 9 pupils will produce a piece of written coursework on a whole play. Our aim in Year 9 is to introduce some of the key skills needed for success at GCSE in a more informal setting although we do not officially start the GCSE course until Year 10. In Years 7-9 all pupils will be expected to present an individual talk to the class and take part in a formal debate.

At GCSE our pupils are studying the Edexcel IGCSE (9-1) course in both English Language and English Literature. The course blends a range of classic and contemporary texts with an emphasis on close reading skills. In both courses 40% of the overall assessment is based upon coursework and the remaining 60% on external examination. 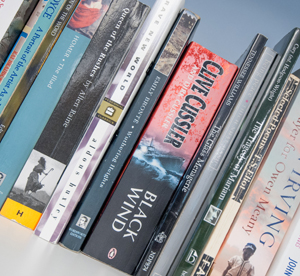 Many pupils opt to continue their study of English at A Level. We study OCR (H472) A Level English Literature. This course provides an excellent opportunity for pupils to study some of the most influential writers in English Literature (Shakespeare, Chaucer, Woolf, Bronte) alongside more modern texts from Norway and America. Our Comparative and Contextual component on Women in Literature invites pupils to study how women have been portrayed in literature over the last two hundred years or so.

As a department we recognise the value of encouraging our pupils to pursue their interests in English outside the classroom. The Coleridge Society runs fortnightly and offers talks and discussion on various literary themes and is open to all Sixth Form pupils. Each year we follow the Carnegie Shadowing as well as the BBC 500 Words competition in Years 7 and 8. There are creative writing groups in all key stages. In addition, we are hoping to enrich our pupils further through a series of theatre trips, lecture days and a possible Sixth Form residential.